Habbatus sauda is from the
Arabic term Habat-ul-Sauda
and is referred to as
Kalonji in South Asia, also known in English
as Black Cumin.

Habbatus sauda is from the Arabic term Habat-ul-Sauda and is referred to
as Kalonji in South Asia, besides having the English name which is Black Cumin. Seeds of Nigella Sativa plant are used primarily as spice, in addition to being used as traditional medicine in numerous countries. Evidence shows nigella sativa was used for both culinary purposes, especially in Indian and Middle Eastern cuisines, as well as medicinally. The medicinal benefits of habbatus sauda were recorded as early as the year 980 by the Persian Muslim physician, Avicenna (Arabic name is Ibn Sīnā, born near Bukhara now in Uzbekistan),who stated that ingesting the seeds of the habbatus sauda plant was a treatment for dyspnea—shortness of breath.Today, habbatus sauda is used as an alternative healing method for a variety of ailments, including headaches, arthritis, congestion, digestive problems and more.

Be the first to review “Habbatus Sauda Oil” Cancel reply 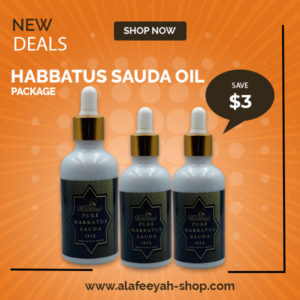